Janie McCauley is an incredible woman, and one I admire on many levels. Janie is an award winning sports journalist for the Associated Press, who covers the Oakland A’s, San Francisco Giants, San Francisco 49ers, Cal athletics, Stanford athletics, and many other stories on a nationwide platform. Janie was the AP’s Sports Writer of the Year in 2006, and has covered sports since her graduation from Washington State in 1998. 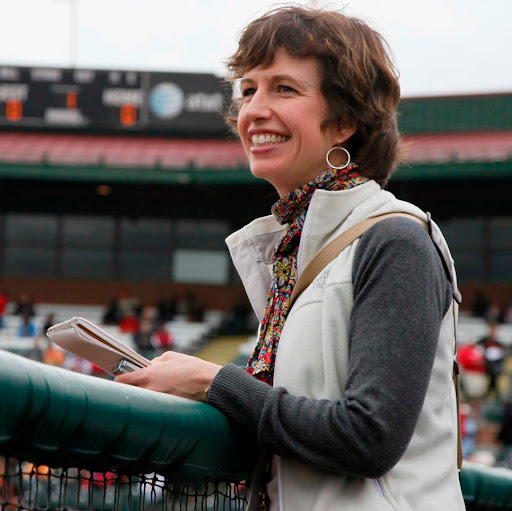 Janie McCauley with the tools for her trade.

Janie’s roots in the Pacific Northwest are very obvious, especially when speaking about basketball. She was a die-hard fan of the Seattle SuperSonics, and went to games with her father as a young girl. She was “extremely heartbroken” when the Sonics moved to Oklahoma City. When she was just 13 years old, she wrote letters to every NBA team, attempting to get some sort of swag from a few teams, and she succeeded, garnering “bumper stickers and other stuff” from every team in the Association. Janie turned this love of sports in the Pacific Northwest, and turned it into a position at the Spokane Spokesman-Review, and then the Seattle AP office. While at the AP, she covered many stories, including many murders and other scary stories.

In 2001, Janie finally got her chance to cover sports on a grander scale. She joined the AP beat for the Mariners in 2001, in which they coincidentally won 116 games, an American League record that still stands. She then came to the Bay Area, and while husband Josh Dubow was on the local beat for the Oakland Raiders and San Jose Sharks, Janie covered the A’s, Giants, 49ers, and the Pac-12 for the Associated Press, which she still does today.

Janie is very straightforward when it comes to her business. Right when she came in the door, she said, “Get used to it. I cover baseball.” This sentence had an incredible amount of weight for the class, and gave everyone the platform to know that this is what she has come here to talk about. This particular quote however, was a response to Janie’s discussion on Jeff Kent, and how he didn’t particularly like women covering the teams in the locker room. Being a woman, however, has not been her biggest hurdle to overcome: “I thank those who came before me, that paved the way for me and others to do this.” In that regard, Janie’s biggest hurdle has been to be simple. Since Janie covers baseball mostly, simplifying and understanding the game have been her biggest professional challenges. Baseball is a very complex game, and sometimes it is very difficult to explain its nuances and quirks. Since Janie did not play, she actually went and worked with some Giants coaches to see how to execute some of the plays, such as a sacrifice bunt.

Throughout her illustrious career, Janie has covered many incredible events, including the 2010 Vancouver Olympics, and the 2014 World Cup in Brazil. But even she knows that the best stories in sports don’t always necessarily happen on the playing surface. The story that she has been writing about former Cal women’s basketball coach, Joanne Boyle, and her struggle to adopt a child from Senegal. It is an incredible saga, that hopefully will be published soon.

How anyone can balance both a family life, and a bustling professional career like Janie does is beyond me, and she deserves an award for that just as much as she deserved one for her writing. Janie McCauley is a woman of many talents, and those talents will shine for years to come.